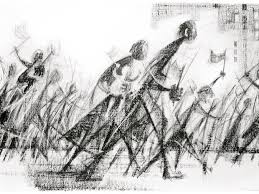 David Kirke is also highly outspoken about Israel and the Jewish people, in particular. He heard at a small grocer near Summertown in Oxford, openly proclaiming how “Jews are responsible for all the troubles in the world.” Proclaiming that “Jews are innately aggressive and like to argue; ‘it’s in their blood'”. several witnesses in the grocer at 2 North Parade who were customers waiting to be served during his outburst, including the assistant proprietor himself. Customers stood in shocked silence as David Kirke continued to denounce Israel and particularly Jews for having transformed “Palestine into a concentration camp”.

“Not all Jews support Israel”, proffered one Jewish American customer. “Oh, an American Jew! You’re all rich, you Americans, why don’t you buy the whole cheese”. David ranted indicating the organic cheese wheel the customer has having cut to size by the assitant proprietor. Kirke continued, “Tell you what, I’ll buy you the whole cheese and then take half of it just like you Jews stole have of Palestine!” The other customers began to exit the grocer. David Kirke had the audacity to leave his business card with the proprietor proclaming that “I’m treated like a King in Oxford; I work with Nasa scientists and ministers; I’m famous, you know.”

It was clear from his beaviour that David Kirke is not only a proud racist and anti-semite but he appeared to be unable to function in public his former reputation as a bungee jumper and dangerous sports fanatic. The only dangerous sport that David Kirke seems to be practicing now is the threat he poses to civil British society and the public good  with his eccentric and offensive behaviour.

This entry was posted on April 9, 2014 by igorgoldkind. It was filed under digital insurgency and was tagged with Anti-Semite, David Kirke, Institutional Racism in Britain, Intolerance, Racism, what's rotten in England.

Follow The Poesie of Igor Goldkind – Reciting Truth to Power on WordPress.com