Famous for his skill with the pen and the sword or the “bun and the bu”, the harmony of fighting and learning. The Samurai were expected to be cultured and literate, and admired the ancient saying “bunbu-ryōdō” (文武両道, lit., literary arts, military arts, both ways) or “The pen and the sword in accord.” By the time of the Edo period, Japan had a higher literacy comparable to that in central Europe.The number of men who actually achieved the ideal and lived their lives by it was high.

An early term for warrior, “uruwashii”, was written with a kanji that combined the characters for literary study (“bun” 文) and military arts (“bu” 武), and is mentioned in the Heike Monogatari (late 12th century). The Heike Monogatari makes reference to the educated poet-swordsman ideal in its mention of Taira no Tadanori’s death:

Friends and foes alike wet their sleeves with tears and said,

What a pity! Tadanori was a great general,
pre-eminent in the arts of both sword and poetry.

it is said the warrior’s is the twofold way of pen and sword, and he should have a taste for both ways. Even if a man has no natural ability he can be a warrior by sticking assiduously to both divisions of the Way. Generally speaking, the way of the warrior is resolute acceptance of death.

Know the smallest things and the biggest things, the shallowest things and the deepest things. As if it were a straight road mapped out on the ground … These things cannot be explained in detail. From one thing, know ten thousand things. When you attain the Way of strategy there will not be one thing you cannot see. You must study hard.

21 Maxims of a Poet Warrior

1. Accept everything just the way it is.
2. Do not seek pleasure for its own sake.
3. Do not, under any circumstances, depend on a partial feeling.
4. Think lightly of yourself and deeply of the world.
5. Be detached from desire your whole life long.
6. Do not regret what you have done.
7. Never be jealous.
8. Never let yourself be saddened by a separation.
9. Resentment and complaint are appropriate neither for oneself nor others.
10. Do not let yourself be guided by the feeling of lust or love.
11. In all things have no preferences.
12. Be indifferent to where you live.
13. Do not pursue the taste of good food.
14. Do not hold on to possessions you no longer need.
15. Do not act following customary beliefs.
16. Do not collect weapons or practice with weapons beyond what is useful.
17. Do not fear death.
18. Do not seek to possess either goods or fiefs for your old age.
19. Respect Buddha and the gods without counting on their help.
20. You may abandon your own body but you must preserve your honour.
21. Never stray from the Way.

21 Maxims of a Wandering Samurai

In fifteen-hundred eighty-four a Samurai was born
Who would become a Ronin and thereby received much scorn
A Ronin is a Samurai who’s masterless, you see
It was quite frowned upon for these Warriors to be free

But Miyamoto knew these twenty-one things to be true
And didn’t need a master to adhere, follow, pursue
He followed his own inner truth and went where the wind blew
And now his maxims have blown your way to inspire you

You do not need to follow them because I told you so
You’ll follow ‘cause they are all truths that you already know
Twenty-one maxims which plainly state truths we may not
Want to follow, some might be resisted, even fought

Because they fly in the face of comfort and luxury
But these are truths that no one can dispute or disagree
Twenty-one steps to let go, to accept and have peace
To understand, to be selfless and make your anguish cease

Twenty-one steps followed by a Ronin Samurai
Who knew the truth was within him and declared, “I won’t die
As many of my brothers did when they had lost their master”
Musashi would not accept anything as a disaster

SAMURAI POETRY: the Way of Pen and Sword

When the Samurai class was established as the ruling caste in Japan at the beginning of the 18th century the warriors were required to educate themselves in practical administration. This included literary skills, culture in general and some familiarity with law. The Samurai had been, even in the early days of the 13th century, relatively literate, compared to the often unlettered Knights and even Kings of the West.

It was traditional for some of them to take part in poetry competitions, though of a rather special kind. In an ordinary poetry contest there are two or three winners so to say, and some in the second rank, as judged by the expert arbiters. These last were often famous poets, but in any case critics of some standing.

However, such a result would not perhaps be satisfactory in the case of Warriors intensely conscious of what they call their ‘Honour’. The loser in a horse race had been known to attack the winner. Even when passing each other in the street, if the tip of one’s scabbard should happen to touch the scabbard of another Samurai it could be taken as an insult leading to a duel.

The organizers of Samurai poetry contests had to devise some way of giving merit or de-merit to each poem without putting most of the contestants in a relatively low category, with just a few enjoying triumph. They devised a system under which each poet’s verse was either a winner or loser, and yet none of them felt absolutely superior or inferior in the contest.

The poems and the poets were divided into two sides, L and R. The proceedings began with a poem on the assigned theme by a poet of the Left; this was read out by his team leader, who might add a word or two in support of it. Then a poem from the Right was read in similar style. Then each pair of poems was considered by the judges and one was declared superior and one the lesser. The judges gave their reasons in each case.

No Samurai felt humiliated even if his poem lost because there was no absolute judgement about the whole contest. Perhaps his verse had lost to the finest verse in the whole collection. Nothing was stated as to this. He might be the second best poet there. And in the same way the winner could not become too over-bearing because it might be, that he was the second worst poet there. So nobody’s honour was touched by the result – good or bad. 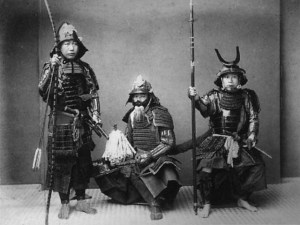 I have looked up the records of one or two of these competitions. The judges’ comments are surprisingly frank: one line which referred to a classical Chinese mountain was criticized as being ‘artificial and a little pedantic’. Another comment was to the effect that a poem had put out leaves, but not flowers. In fact many of the comments by the judges were on the negative side. It is believed that the harshness of criticism did raise the level of poetic achievement. In the 12th century the uta-awase or poetry contest was one of the main forms of entertainment. It is especially noteworthy that the poems were judged by being spoken aloud, and not in written form. This meant that the language had to be kept simple, with few Sino-Japanese compounds that are often ambiguous when spoken. The poems could thus be understood and appreciated by ordinary people, not simply by cultivated courtiers. This strain of elegant simplicity and austerity runs through much of Japanese traditional culture, which is correspondingly inexpensive and could thus percolate down to the relatively poor members of society.

The honour in which a good poet was held is reflected in an historical incident. A castle was under siege and the attackers were going to mount simultaneous assaults on the four gates. But their commander discovered that one of the defenders at the south gate was a famous poet. He gave orders that the attack on the south gate should be only a sham affair so that the poet would not be killed. However it should be added that in a similar case where, an attacker had hinted that a particularly talented Samurai defender should not be killed; the man in question by chance discovered this. Before the battle began he dressed in brilliant colours with his family crest prominent and charged out at the head of his men to meet the attackers. They had to cut him down, but it is good to record that his opposing commander wrote a poem commending his heroism. 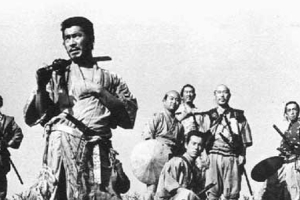 This entry was posted on June 14, 2014 by igorgoldkind. It was filed under Uncategorized .

Follow The Poesie of Igor Goldkind ––– Reciting Truth to Power on WordPress.com