Neuro-Phenomenology: The Science of Awareness

Well, not really a Science, Neuro-Phenomenology is more like a scientifically-styled enquiry  in an area mainly  littered by philosophy treatises.    The advent is not in so much Neuroscience (new data), but the central role advanced imaging software  has helped us in drawing  intuitive conclusions directly from our ability to interpret data visually.  These intuition-led conclusions once corroborated by the logic of the data, are easily conveyed; easily understood  by even the layman.

This tense, leaky dam between art and science, where art’s children keep jumping the border into the more affluent Science region, where the jobs are better paid, is flooding more and more partisan areas of endeavor, largely through the application of our new technologies which are of course not purely a result of engineering, mathematics, science and art; but all 3.

But we can’t go much further without defining our terms, starting with Art:

The Definition of Art: a noun, a verb and an adverb, qualifying a verb (to fence artfully).  To express, act, or create an artifact, sound, visual or experience  that is solely and purely for and of itself, with no other specific function or purpose.By being purely of and for itself, the expression draws attention purely to itself and in doing so tells us something about everything else in the world; about our perception of the world, ourselves and who we are in it.  Art is as authentic investigation into the world as Science is; its cousins are  psychology, philosophy, architecture, mathematics, physics, biology and  chemistry (at very least).

But more than a science or an algorithm can do on its own, Art brings the realm of emotion into play.  As artists we explore the topography of emotion as studiously as we would paint a landscape.  We are the explorers of your inner world, the thoughts, the fears, the bliss and tears that you would have thought no one else could ever know.  Well we do.  We know because we have felt so too.

The value of Art is that it speaks to what is true of all of us.

We are individuals who group tribally, regionally, religiously, politically; we fabricate our identity our egos based on our differences.  We are the NOT people.  We are NOT Protestant but Catholic.  We are NOT Muslim but Christian.  We are NOT gay but straight.  We are NOT poor but getting by.  We are NOT old but young etc.

We define our identities more by what or who we are NOT  than who it is that we are.

We live by discernment which is crucial to survival be it choosing the right berry, the bison of the herd, the right status in the tribe or the right health insurance, discernment is the armory of survival.

Whereas distinction and discernment are useful for asserting the component, particle nature of individual identity, it does little to illuminate how identity merges into play.  We are not islands but rather pebbles in a rushing stream.  We are swept by forces mostly beyond our control and yet our egos  refuse to relinquish discernment and resist identifying with anything around us.  And that’s precisely when the limitations of our awareness pose a direct threat to our survival.

Identity, in contrast with Difference (or distinction),  is a predisposition towards  a commonalty of attribute and experience.

A Zen monk would practice this discipline  with a stone.

But we have much more fun subjects to experiment on: Each Other!

Identity is relational; we are often comparing ourselves to our parents, our siblings, our peers to get a bearing on who we are at any particular time.  But if we were to look for common experience, common emotion, common needs, we turn the shadow of contrast into a mirror of reflection.  When we see the Self in others the world is transformed into Steppenwolf’s Magic Circus; or the finale to The Lady from Shanghai by Orson Wells.

Our sensory faculties unite us and language and Art are the expression of that unity.

The hazard of course, is empathy.

The more we see and understand in common with others, the greater becomes our awareness of the burden of pain and suffering that most of us carry.    For instance, when I watch the razing of Gaza, I know no Palestinians who are dying there.  I know no families disintegrated, no weeping mothers, no mortified fathers soaked in their daughters blood.

I know none of those people.  And they are not of my tribe.  Nor of my region; they are however, the victim of my government’s brutal political alignment with the perpetrator of (what sure looks like it to me from here!), war crimes.  (If Israel is using white phosphorous on civilians then they are committing war crimes according to the Geneva Conventions).

The point being that although I have no connection to those people apart from the screen and my imagination; there is enough there for me to identify individuals like me; with senses, faculties, children, parents, houses, dinners, picnics, weddings, births, deaths, joys and sorrows just like me!

It is there where the imagination that is addressed directly by the artist can take the extra step and cross the line of distinction into identity. I can intuitively detect a pattern of the human experience from my visual interpretation of the  screen data.   I can reflect on the never changing state of man by reading 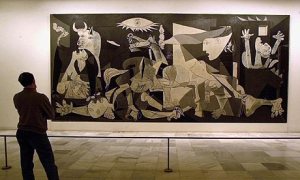 Dostoevsky, hearing Beethoven or looking at the Guernica.  I can see  exactly how the people I am aware of are as much me as they are distinct from me.

Art, Science and mathematics are all to varying extents, investigations into the world and ourselves in the world.  They are all earnest quests into the heart and nature of Being.  And they all require an awareness of Self in play with the world, the nature of experience, in order to arrive anywhere near  the comprehension that these disciplines  were developed to achieve.  It maybe time to un-distinguish the three chariots pursuing knowledge for a greater vehicle that address the fundamental cause of all 3: the investigation of the world and our Selves in it:

The Biogenetic Structuralism group, suggests that invariant patterns and structures discovered in first-person explorations of consciousness may find their explanation in the physiology and functioning of the brain.  Based on a theoretical framework of neurodynamics that draws upon insights from chaos theory, Neuro-Phenomenology asserts that the currency of brains is primarily meaning, and only secondarily information.

Neuro-Phenomenology is the science of experience or rather our awareness of experience and the cognitive cycles  that formulate our experience both day-to-day,  scientifically  and  mathematically.    But that’s just an academic category.  The real story has to do with the science of experience, which really is the vocation of the Artist.  Technology our tools, are leading us to a re-mergence of the underlying unity to our disciplines: Art, Science, Mathematics.

We are all distinct passengers but travelling on the same (technological) bus in the same direction.

This is what defines our commonality, our common humanity.  We are a priori linked by sensual architecture. by the blue print of our faculties; for inspite of our differences we all remember, dream and anticipate in very similar ways.  In very human ways.  To define a Humanity, a secular identity removed from spiritual partisanship or relgious faith is to uncover common ground. To start from the point of familiarity and identity in order to first understand. then acknowledge our differences and hopefully learn from them and this process.