. . . in nervous anticipation of the world.  Curiousity, tempered by peer acquired knowledge  butts against the barricades of adulthood.  We’re ready to storm the Citadel of your privilege!  We are the next generation and that world you’re holding hostage belongs to us!  (Now hand it over before anyone gets hurt.)

My daughter, Olivia is 15 and visting me from just outside Oxford, England where she lives with her mother and has never had less than a straight A+ report card.  She just took a flight by herself from London Heathrow to San Diego, at 15.

When I was 15 my parents were getting divorced, badly.

So I ran away from home.

I told my mom, my dad  had moved out, that I was going camping with my friend Barry Alphonso for a few days and I asked her if she could give me a ride to Pacific Beach where Barry lived and where his mom was driving us from. 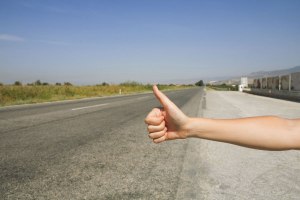 I didn’t see my mother again for another 12 weeks. I met Barry alright in PB near the freeway on-ramp onto 5 heading north.  I had an overstuffed backpack, a golf club (for walking and protection), about $40.00 I had stolen from my mother’s purse: the source of all comforts.  At  15 I found myself standing on an on-ramp in Pacific Beach  holding my glof club in one hand and sticking out my thumb with the other.  Barry lingered, somewhat doubting I would hitch a ride and curious as to my sticking my toes over the precipace into the unknown.  Would I really jump or just go home?

Me, all I had was the certainty I needed to leave my broken family behind.  There was too much incomprehensible grief, the loss of our house, our income, our home.  My mother and father’s loving looks twisted into evil eyes of anger, hatred and contempt for each other.  But me and my sister couldn’t help but suspect that we were the root of the problem.  After all, if they hadn’t had us; they could split up and both be happy somewhere else, with someone else.  Idiots think that children are somehow less responsible.

That’s not the problem.  A child is much too responsible, in our minds we feel responsible  for the world.

A delusion I have heartily welcomed back into my life at this late age.

At 15, I find myself standing on the verge of an open highway with my thumb sticking in the wind: the greatest gesture of hope and faith I have ever made in my life.  I had never hitchiked before and all I had were vague images of an Emerald San Francisco where my dad had driven us to years ago and near where my older brother was dodging tear gas on his way to class at Berkeley.  I had the swirling images of Bob Dylan songs and Paul Simon melodies to sing to my self on the side of the road.  If you really hit the groove on the song, you were always guaranteed a ride.  The joy of music and singing is infectous and hits the bubbled drivers like a laser, traveling 80mph!

This was also  still the time of war and the rice paddies and tunnels of Vietnam were making their way  underground into the California bread basket. 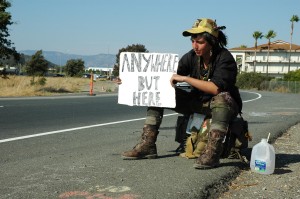 Lots of people I met on the road were veterans.  I hear its the same on the road today.  An army comes home to a lost highway.   Damaged souls with haunted eyes.  Hanging with  flea bitten ex fighting dogs and still wearing their green fatigues.  Some even still wore their dog tags that flickered in the sun and the sterno-light alike;  chained butterflies at the end of a beaded  neck chain .

Some of the sad were mad and would wander way from the fire or the on-ramp or under the bridge and howl at the sky.  No one ever paid them any mind.  it was impolite to comment on a soldier’s anguish.  These lost souls, these fragmented  men taught me so much about hitchhiking and rail car hopping, how to get a free meal at a road side McDonald’s in exchange for picking up the litter . . . 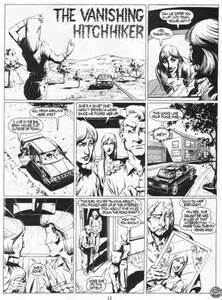 Which Jesus shelters were tolerable and which to steer away from.  (Generally, a meal, a sermon and a bed were tolerable.  Anythng more than that was considered risky.  I had a Christian woman visit me several times in one night in my bunk bed trying to convince me to accept Jesus while she  roamed her hands under my bed clothes.

Religion is allot like sex except that unlike sex, it gets it wrong.)

Most of all those lost soldiers, ghosts of events everyone wanted forgotten, they taught me how to forgive my father, another broken soldier who had taken out his white light rage on me and my brother, with his belt and with his fists.  Those men, may killers, taught me at 15 what I needed to know for real, so I could later tell my father what he had done to me  and I could look him I the eyes and forgive him because I knew and understood that  wasn’t his fault.

It’s the same fucking War, peeps: when we going to call  it quits?

How much more do we have to endure of your arrogant greed, your inhumanity, your thoughtless disregard for Life?

I had adventures on that road to Oz.

Through the valleys of the Jesus people.

On the highway, pulling all sorts of motorised vehicles with my magnetic thumb.

Drinking beer for the first time at the cowboy ranch Bacchanal after the rancher’s hand picked up 5 of us hitchers in the back of his pickup truck, just to give us beer and music at the farm.  Being kissed by a girl who’s name I never would know, or need to,  for the very first time—There is no thrill greater than a fleeting one.    In the back of the Wizard’s goatee-ed van who dressed his poodle in a bright green doggy sweater and  offered to buy me dinner  later if he could show me his doggy tricks.

The biker under the bridge who’s hog had broken down in the downpour near the Oregon border.  And me, a drowned puppy carrying a golf club for protection, drenched to my bones and shaking like the Devil at Communion.

The big, bearded, bike-bear stared at me under the bridge for awhile and made me nervous.

This was his bridge. 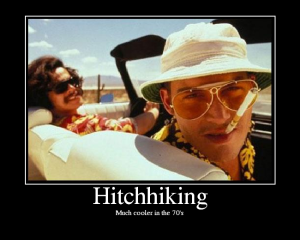 After awhile, he broke his stare and waved me silently over across the road.  The only bikers I knew anything about were the ones that put Hunter S Thompson in the hospital because they didn’t like what he had written about them in his book.  Shit!

But ‘Lucky’ was a quiet mountain.  He gave me a green wool army blanket from his bike’s saddle bag and a Camel straight from his half empty pack; my first ever.  The rain was coming down steady, heavy and cold.  I had “smartly” chosen the month of November to make my break to freedom.  Lucky had a can of sterno, a metal cup and Nescafe.  There was water, water, everywhere and more than enough to drink.

Lucky didn’t say much but when I stopped shaking he poured from a bottle of Wild Turkey 101 into the hot metal nescafe cup and we shared it.  I did not know this quiet dark bearded man, where he came from, what his story was or even it was safe to hang  with him under this bridge in the rain.  But he was my older brother  in the moment we were in and when Lucky finally did say something to me it was a 3 word question:

I glanced down at the the minature wooden chess set Lucky had extracted from his saddle bag.

Paying chess with a leather suited biker under a bridge under the pouring Oregon rain.

This entry was posted on August 9, 2014 by igorgoldkind. It was filed under Americana, anarchy, literature, poetry, story-telling .

Join 4,179 other followers
Follow The Poesie of Igor Goldkind – Reciting Truth to Power on WordPress.com