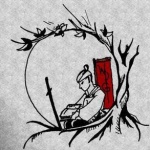 We are living in a culture entirely hypnotized by the illusion of time, in which the so-called present moment is felt as nothing but an infinitesimal hairline between an all-powerfully causative past and an absorbingly important future.

We have no present.

Our consciousness is almost completely preoccupied with memory and expectation. 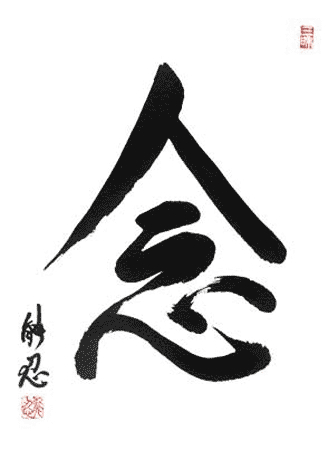 I first met Liam Sharp in the editorial offices of 2000AD when he was a young jobbing artist. He had hair back then. He also had a journeyman’s attitude that stood out and distinguished him from the parade of amateur portfolio-ed artists who regularly hung out in the 3 floor reception of Greater London House, in the Camden of early 1990’s North London, where comics were being published. 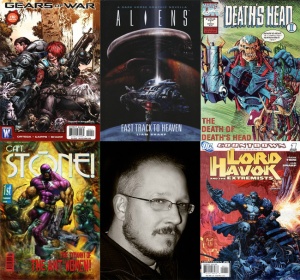 (We all worked in the neighborhood that Amy Winehouse grew up, sang and died in.)

Liam made his debut in the late 1980s drawing Judge Dredd for 2000AD, where I was working as the marketing manager in order to promote 2000AD and launch 3 new comics titles onto the newsstand market.   These were the days that a comic like 2000 AD sold 100,000 copies A WEEK. (80% newsstand sales!) I met many of the young guns at the time like Liam who later, established a deservedly high reputation in US comics.     At the time, I had the fortunate vantage point of being a “suit” that actually valued the artistry and narrative of the work being produced for a mass-market audience.

When Liam came to Greater London House, both Richard Burton, the then editor of 200AD and Alan Mackenzie, his deputy would meet him at reception, usher him in and introduce Liam to others and myself. This was, I observed at the time, special treatment I only saw on display for Grant Morrison on his frequent visits and Alan Moore on his less frequent ones.   So I knew that editorially, Liam was a VIP and it was when Richard gloated to me about Liam’s apprenticeship with the British comics industry version of Jack Kirby: Don Lawrence that immediately drew my attention to Liam. 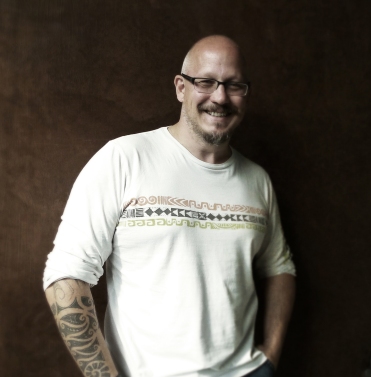 When I met and had a pint with him, (an essential communications tool in Britain: the pint), I discovered a young, working class man with a gift for art who had won both placement and scholarship in a reputable middle class school; and who had then chosen to askew an equally merited University placement in order to work instead, as an apprentice to Don Lawrence.

Don Lawrence was admittedly considered the finest British comics artist of the time, but still! This was not so much radically different as radically traditional. Liam chose his own path as a student and as an artist.   Regardless, one thing was crystal clear to me: Liam Sharp had balls. 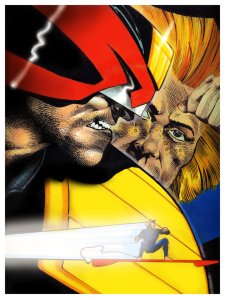 Liam later moved to Marvel UK, where he drew the best-selling Marvel UK title ever, Death’s Head II. Liam then was at the crest of the wave of British artists and writers invading the offices and comic book shelves of the US comics industry with books as diverse as the X-Men, the Hulk, Spider-Man, Venom, Man-Thing (for Marvel Comics), Superman, Batman, and The Possessed (for DC Comics and Wildstorm), Spawn: The Dark Ages (for Todd McFarlane and Image) and Red Sonja for Dynamite comics.

The pre-comics-fame Liam I met was a young, muscular Northerner from Derbyshire with a broader-voweled accent than his southern, countrymen. Liam and his ilk (English people from anywhere north of Birmingham; or as we used to call, the rest of the country) had a different style, a different way about them. More plain spoken, self-modest and more eager to share a laugh, than their southern counterparts, the Northern British seemed to have crossed a border from another country, sitting in the reception area of Greater London House on Euston Road.

It was a different time:

Alan Moore was still talking to people; Neil Gaiman was in perpetual leather-jacketed, Lou Reed mode,  Grant Morrison was shy and Warren Ellis actually seemed scary to me. And everybody seemed to be on the same side: you were either publishing comics or you were writing or drawing (or both) comics.

Hard to describe to comics fans these days. Comics writing, drawing, publishing, selling, collecting has always been about 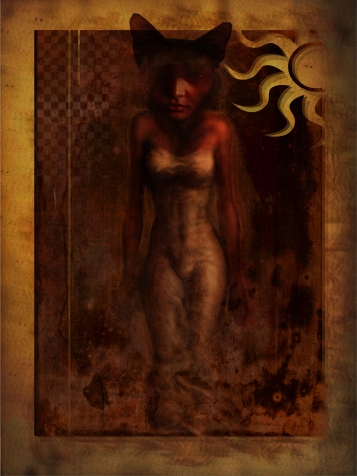 money. But in London, because of it’s New York-density, spread out over the land area of an LA; everything wound up affecting everything else. Comics did become the new rock and roll. Comics’ design and styles infiltrated the print media. Comics characters costumes, the street fashion scene, comics stories (Halo Jones, Watchmen, Judge Dredd) were injecting the music scene and this was 10 year before the comic book movies.

I first met Liam in the wake of what seemed, to all of us at the time, a unique cultural explosion. Comics had infiltrated every corner of popular fashion. Just as in the 60’s, London record companies were overwhelmed by young English songwriters and bands; the office of British comics companies in the at least the first long train journeys from Newcastle, Glasgow, Birmingham and of course Derby hoping for a commission.   It was in the middle of this flurry of excitement, 3 new weekly and monthly comics being launched and work was on offer. It was the comics equivalent of a gold rush.   The impact was also felt in the aesthetic migration of artists from all media to the sequential, to the narrative textures of images.

Painters like Simon Bisley and mixed media artists such as Dave McKean were pushing the envelope on what was considered acceptable art for comics. I remember pages of artwork that were so densely painted or mixed up with objects that the printer could literally not bend the page around the drum needed to shoot the film. Layers of film had to be shot to turn these new, thickly, painted canvasses into comics pages. Experiments were being tried and barriers were being broken.

But 20 odd years later, Liam is still a working artist. More importantly, he has mutated into that essential modern mold, that survivalist camouflage, of entrepreneur. The smart businessman/artist/producer, all artists working in the popular arts, (not just comics), need to be in order to earn a living with their craft.

Liam Sharp is again at the crest of a new wave of artists who understand the entire cycle of creation, production and dissemination of a creative product to a market.

With the founding of Madefire.com in Berkeley, California, in 2011, Liam took his Northern English, working class creative drive to the edge of the medium again. Motion books are moving narratives, in both senses of the term and Liam continues to further his artistry both visually as an artist and producer, but also as a writer in his current ground-breaking Motion Book for Madefire.com “Captain Stone is Missing” written with his wife Christina McCormack. 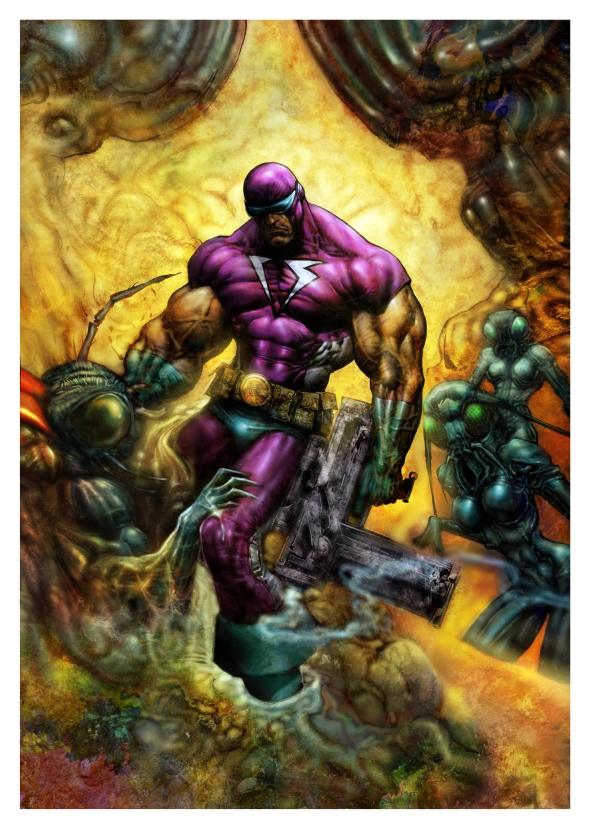 Liam’s critically acclaimed first novel GOD KILLERS: MACHIVARIUS POINT & OTHER TALES was published in 2008 with a second edition in 2009.

Liam Aliens graphic novella Aliens: Fast Track to Heaven for Dark Horse, which he both wrote and illustrated, has been critically acclaimed.

Liam Sharp is not just a successful artist, producer and now publisher, he uses his expertise and now sizeable experience to not just accumulate money (and rare bourbons), but to generate new work, to create value that engages; which is after all, the duty of an artist, is it not?

If it is an artist’s duty to advance the medium they craft in, then Ladies and Gentleman I present Liam with my imaginary, CGI Medal of Valor beyond the call of duty in the field of creative endeavor.

“For Chrissakes, Liam! Keep your helmet on; that’s live ammo they’re using out there!” 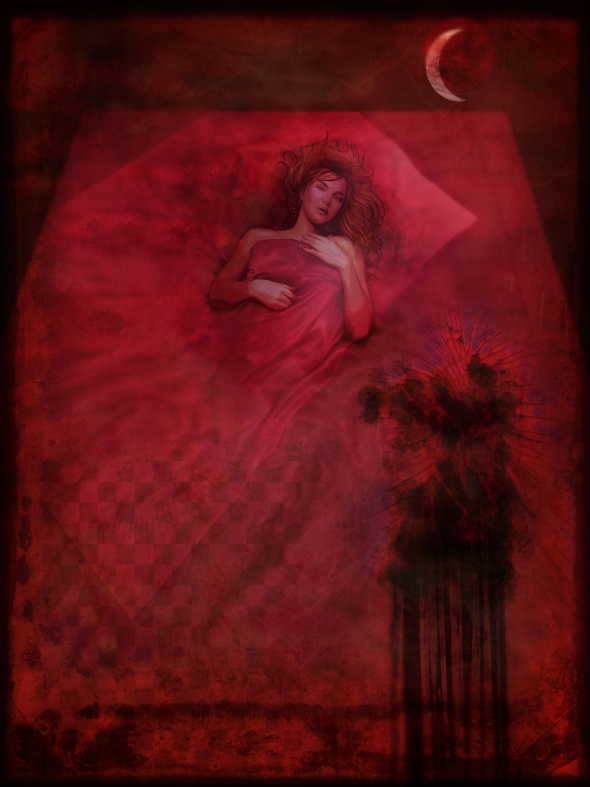