The Woman I Never Got to Love


I never really knew Hannah Northedge apart from our Facebook exchanges. I think it was she that first started commenting on my postings. I read her comments with bemusement and replied.   Earnest, sincere, a bit young girlish but always quintessentially English. That refined contrivance that is both over-mannered and elegant at the same time.  And yet we shared a sense of humour, which is an astonishment between an Englishwoman and an American.

The real English, the softcenter at the core of the cracked, hard surface, English remind me no one more so than of the Japanese. Both island peoples deeply suspicious of foreign invaders and both sewn tightly within an intricately embroidered fabric of ritual, custom and politesse. Both peoples’ have a tea ceremony; one with boiled spring water and green leaf powder, the other with scones, clotted cream and jams.

I did not really know Hannah Northedge but I knew what she was like. A middle-class Midlands girl from Leicester with financially nurturing parents and an early gift, really, a passion for music. She must have dreamed as a young studious girl coming to the Big Smoke, to London to make it big as a chanteuse, as a professional jazz singer. Hannah’s own cover version of Dick Whittington sans cat. This would have been for her a dream logically constructed from sturdy childhood building blocks. Each carefully poised upon the other, pushing gradually upwards into a stern, determined tower of accomplishments.

Hannah would teach music on the side, to students both male and female to make ends meet in a rapidly escalating London that had long driven me from its financial borders. Living in London is not an easy thing. Not for any young man or woman and certainly not for a high strung, talented musician intent on being the best at what she could already do quite well.

The dedication of an artist is blind. Blind to all things that do not further the acts of creation. There is no greater earthly power than to suddenly plug one’s hours, days, years of practice into an unearthly circuit that seems connected to the very essence of one’s living. That sudden bursting propulsion ever further, and ever greater into what you had always wanted to attain and seemed now to be as effortless as a second nature. Suddenly you are living your higher nature!

Any artist, any writer, any dancer and any musician will tell you that this moment of being ‘experienced’ of being played upon what feels like the very aesthetic strings of life is at best indescribable. This is much more than being “in the zone” as an athlete or card player might venture. This is about the zone being in you and all around you; in every pore and molecule of your being until it would take more effort to stop the momentum than to just let yourself keep falling forwards. Pulled into the very gravity of creation.

The Red Shoes is a 1948 British drama film written, directed and produced by the team of Michael Powell and Emeric Pressburger and based on the story by Hans Christian Anderson about a pair of red shoes that are enchanted and when worn enchant the ballerina dancer into dancing more powerfully, more perfectly than she has ever danced before. Until tragically in the end, the dancer cannot stop the shoes from dancing her to her death. A glorious death brought to life by a magical realism. One that many would gloriously surrender to just to be swept up in that dance unto death.

Hannah had no red shoes to speak of, but her throat, her lungs, her diaphragm and her instinct for music were as enchanted as they were enchanting. They were her soul and at very least they enchanted me. I never really liked what she sang. Of course I never told her that; (why would I?) To me, perhaps unfairly, it reeked of nostalgia and a wonting for a long disappeared time. Her numbers were swing, pre-integrated jazz; the time of Louis Armstrong and grinning happy black men.

Hannah in many ways embodied that stalwart and determined optimism of the English. Being bombed by a vastly superior air force, on the very brink of invasion and yet somehow, against every indication to the contrary, still anticipating a break in the weather. Raining bombs on old London town. By the time American GIs were deployed to England the response of the British and I can hear Hannah saying exactly this, was “About bloody time! How nice of you to finally show up for the party!” “Better late than never, I suppose!”

This was the playful sarcasm of the English by which they kept themselves and each other bemused whilst coping with the obstacles at hand This has always been lost on my American comrades. We think it’s rather mocking, which of course it is; it’s merely a democratic mockery, a Monty Python hysteria at the awesome absurdity of Life and it all. When it comes to jokes and putdowns and the English, no one ever gets out alive, no less so than the English themselves. Self-effacement and self-mockery are not part of the American skill set and we would be fortunate in having few English Life Coach instructors to teach us a thing or two about the proper positioning and placement of the ego.

But I digress from my digression. Hannah was quintessentially English, youthfully so. Although merely some ten years younger than me, she somehow always made me feel that she was much younger than that. A child’s wide-eyed openness beaming from a woman’s face I believe that that child-like disposition, as well as her nervousness and constant stress, were hand in glove with her talent. She desperately needed to keep performing, to keep belting out those numbers because her life really did depend on it. 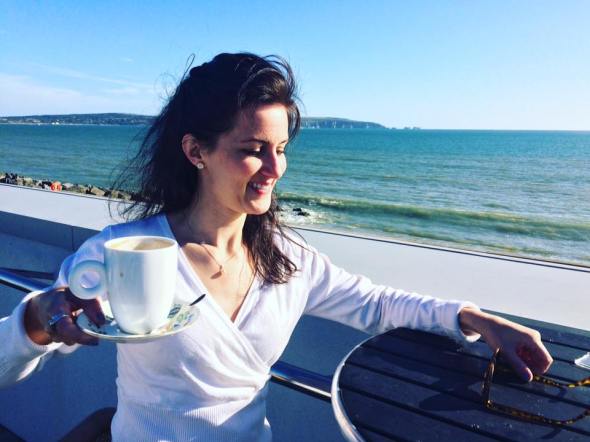 I was supposed to take Hannah out on a date this Spring in London. Not really a date, more like a shared joke. Both of us had frequently traded our frustrations with the opposite sex and one night I asked Hannah to describe her perfect London date to me. It involved dinner and dancing and her description was so lighthearted and life-affirming fun that I immediately promised her that as soon as I got to London I would take her out on that exact same date. I made that promise not to impress Hannah or woo her but because what she described sounded like such god damn fun that I wanted in on it! Hannah’s lust for life was infectious. Most important of all, Hannah laughed at all of my jokes, even the ones that didn’t merit laughter.

Alas, our date to laugh is not to be. The one woman in 3 years who had finally agreed to go out with me, drowned herself instead at the very prospect. Now that’s a good joke. One that Hannah would have heartily laughed at.

What can I say about suicide? And I understand as of late through a mutual friend that that is exactly what Hannah Northedge had planned in advance and self-executed (so to speak). Albert Camus said that the only question worth asking in life is whether or not to commit suicide; each and every morning when we awake we should ask ourselves that very same question. Because in all honesty, in asking ourselves that question we are never freer. Simply because if we do not choose to end it all; (and I assume that anyone reading this has chosen other than that), then what we have chosen is everything else instead. Because we could have chosen the only alternative to living there is, but we did not to.

I don’t know if Hannah asked herself that very question waking in her luxurious hotel room in Eastbourne, near Beach Head, Britain’s top suicide spot. She certainly had chosen a fine hotel in which to waylay her return to London. Perhaps I will pay that hotel a visit just to catch that final view of the sea we might have shared and toasted. I do not know what state of mind she was in when her parents sent her back home to London from her childhood home in Leicester. English parenting can be harshly stoic at times.

All I do really know for sure about suicide, and in fact, that is what Hannah committed herself to, is that it is an act of self-agency. You may not want to hear this, but please listen because it’s true. Take this bitter pill from one who knows: Suicide is a determined act to strike out against a world of pain and futile injustice. It is not weakness nor surrender that causes one to take one’s own life. It is instead the ultimate act of defiance, an act of unnatural courage and entails a great act of will against all instinct; against the very will to survive.

To look at the universe that gave birth to one’s own conscious mind and in full consciousness scream “No!” “No, this life was not worth the pain, the agony, the empty suffering of my existence!” “You can just take it, just have it all back”. “This was never going to be good enough and I’m putting an end to it here and now because it is my choice my freedom, my volition to do so!”

I do not know of Hannah’s pain apart from what she told me of it. I do know that her despair at romance and at its betrayal weighed heavy on her. If there is any lesson to be garnered from her passing, be it what I tell my own daughter time and time again: never ever believe that you will ever need a man to be happy as a woman.

It’s possible to have both, but by no means mandatory; nor is a man ever the sole path to happiness. We are at best unreliable and at worst, much worse than that.

Hannah did seem determinedly desperate in her remaining months; determined to be believed and desperate not to be dismissed as a hypochondriac lunatic. Which from my own experience with medical authorities. their tendency to treat the symptoms more urgently than the patient surely is lacking some benefit.

I know that there are those of us who in trying to find some salve for our confusion and our anger will demand answers from doctors, from landlords and mould experts; from Hannah Northedge’s own family, even. I know that righteous confusion first hand. To you, I say what my baby sister’s widow said to me at the time of her untimely passing: “nothing that we do, nothing that we try, no matter how hard is ever going to bring her back”.

We need all to find our peace with that.

Follow The Poesie of Igor Goldkind – Reciting Truth to Power on WordPress.com