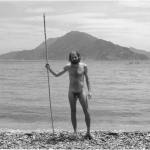 Once again the ghostly powers of Facebook have judged me and found me wanting.

Or wanting of the veneer of non threatening, amiable posts. Nothing that would offend a Humming Bird of nerve endings. A Calvinist shaking in their boots. I’m not a Facebook post, you don’t have to like me!

My grave offence was to post a photograph of the great American poet Allen Ginsberg standing naked on a Moroccan beach. The original naked poet; metaphor and literal combined into one. His words, not his images were deemed obscene way back in the last century. There was a public trial and unlike Socrates, Ginsberg (and City Lights, the publisher) were both found not guilty of obscenity. Howl was deemed a work of art and protected under the first amendment. Why doesn’t Facebook abide by the first amendment instead of hiding like a coward behind their Emerald City curtain of Community Standards?

And why don’t Americans know their own history?

I had the opportunity to meet and talk with Allen Ginsberg during my Freshman year, when he had come to do a reading and lead a group meditation paying his dreadful table accordion. Was I 17 or 18? I was studying Heidegger and Charles Olsen, the Action Poet; Kandinsky’s New York roommate right round 1959 thereabouts, when the photo of Ginsberg on the Beach was taken. But I knew all of his work, inside and out. I was never gay but Ginsberg made me want to be!

I had stopped Allen in an outdoor corridor lined by lawn between two campus buildings. I was armed with my copy of the first edition City Lights Kaddish epic that I had found by blissful chance in the long gone used intelligentia bookstore at the corner of College and El Cajon Blvd, in San Diego, over a lifetime ago.

Allen looked at my book and gladly signed it. “I haven’t seen a first edition of these in years!” I told Allen about the used book store in San Diego where I had gone through all of his poetry and Kerouac and Cassidy’s First Third and Dylan’s Tarantula, Alan Watts, D.T. Suzuki’s 3 volume Essays on Zen, all bought and consumed at this temple to beatitude at the cross roads of the world. I didn’t tell him how in high school we used to climb to the top of Cowell Mountain and howl the words to Howl at the valley unfolding beneath us. We didn’t know what hungry junkies were quite yet, but it sounded good and it was real. As real as the suburbs of San Diego can ever be.

In the past present, Allen handed me my book, more of a pamphlet, back and looked me up and down and smiled. It was a genuine smile and not the least bit lecherous considering what he said next.
“Would you like to come up to my room, it’s just over graduate housing? I can show you some poem books you haven’t seen. I knew what he meant but I was so stunned dumb by the proposition (Allen Ginsberg!). I stuttered something still trying to make up my mind before I spoke. But alas, fear of the unknown vanquished my curiousity or perhaps it was my vanity to be loved by a star that was defeated.

Nonetheless I must of said something because we went on our merry ways, my thanking him a little too profusely and the back of his bald head bobbing down the corridor.

So when I posted the photo a young Allen standing nude on a Morrocan beach, I kind of felt like I had earned the right to share his image, naked and vulnerable for the sake of a poetry reading which it was more than certain that someone would recite a Ginsberg-eque poem.

The Philistines may have conquered the machines but not me as of yet.